If you are in Kentucky and have an extra 30 bucks lying around (mainly because you wouldn’t want to donate that money to scientific cancer research or anything like that) then you can go visit the Creation Museum!

Quit frankly it seems like a really fun place, especially for kids. If it wasn’t pushed as the ultimate truth, and it were left as a fun children’s playground, I might not be so opposed. The issue is that the founders of the Creation Museum seem to think that scientific theories are just something that you sit around and make up based on what you believe. There seems to be a huge disconnect between understanding the scientific process and how it leads to scientific theory. The museum doesn’t end at creationism. You can also catch shows at the planetarium such as “The Christmas Star,” where you can learn about “possible” explanations for the “star” that led the wise men to Christ.

This brings us to the debate between Bill Nye and Ken Ham, the head of the creation museum. Bill Nye has been a fierce advocate for science, and Ken Ham has been a strong preacher of creationism. Before the debate, there was a fair amount of criticism regarding Bill Nye actually debating a creationist. I am personally am all for it. You absolutely need to talk with people who have opposing views to share your ideas, and not turn your nose up at them.

For an overview of the debate, you can click here. I’m posting  the full debate below:

“So it sounds to me, just listening to you over the last two minutes, that there are certain parts of this document, the bible, that you embrace literally, and other parts that you consider poetry. So it sounds to me in those last two minutes like you’re going to take what you like, interpret literally, and other passages you’re going to interpret as poetic descriptions of human events.”

Emily Graslie, host of “The Brain Scoop,” talks about some of the sexist mail she receives. I thought this video was really well done, especially since she discusses some more personal notes about how sexist comments aimed specifically at women drive women away from making video blogs.

Here are some candid quotes from her video, but the whole video is excellent.

“What is preventing women from reaching the same number of people? I feel like in general women don’t have enough time to do these things because of the pressure that every episode has to be flawless in execution. This could be a deterrent for both men and women, but I feel like women are going to give up more easily because of comments like this, ‘I’d still totally do her.’”

“We have a fear of the feedback from our subscribers and commenters because we’re afraid that our audience is more focused on our appearance than the quality of our content.”

“There’s a fear of the awkwardness that comes with being onscreen with anybody else because some assume that there must be some sort of personal relationship happening which makes work with that person later on awkward…That brings on self criticism like I’m not funny or intelligent or engaging enough on my own.”

“There’s a pressure to be the whole package. Not only do you have to be intelligent and articulate, but you also have to be attractive.”

A NASA image of Mars from the Hubble Space Telescope

The NASA mission to mars, MAVEN (Mars Atmospheric and Volatile     EvolutionN), will be launching in a little over a week on November 18. This very exciting mission is going to investigate what happened to Mars’s atmosphere. It is thought that at one time the atmosphere was dense enough to support water on the surface of Mars. The mission will give clues about whether Mars could have supported life at one time. MAVEN will take 10 months to reach the planet of Mars.

You can keep tabs on the mission here.

A Roundup of the Government Shutdown

Congress voted to repeal the affordable care act dozens of times. Yet, with 15.4 percent of Americans uninsured, there needs to be a discussion around health insurance.

Here are just a few of the impacted agencies that have been impacted by the government shutdown.

The redirect for the Women Infants Children Program (WIC) website

A message from Centre National d’Etudes Spatiales (CNES), the French space agency. The shutdown of US government is having impacts in countries outside of the US.

A message from NOAA

The National Parks are closed.

The National Institute of Standards (that place that oversees the atomic clock as well as other cool research) is closed.

The department of education is also shut down.

Department of Health and Human Services 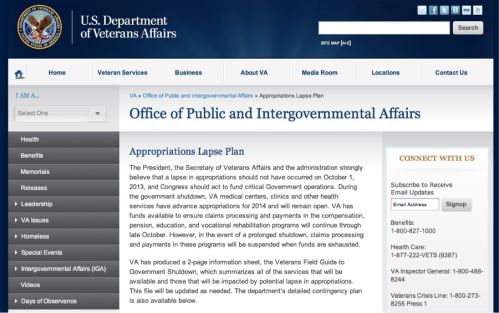 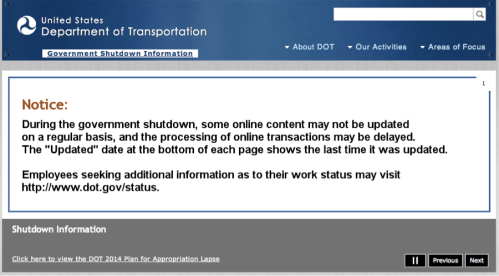 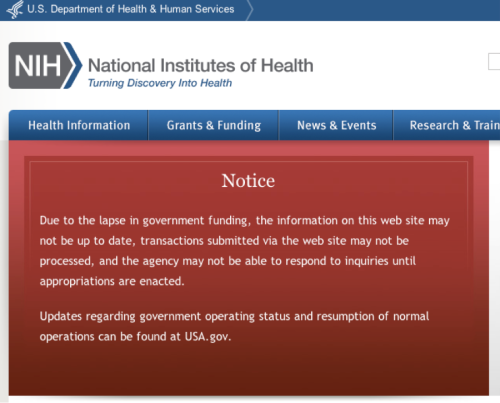 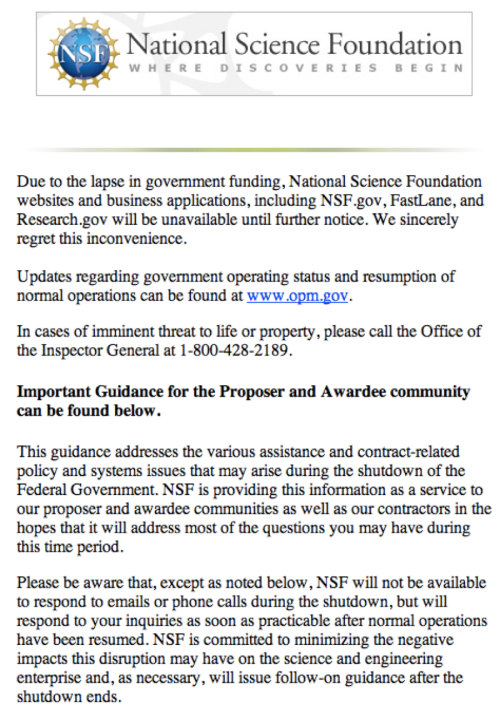 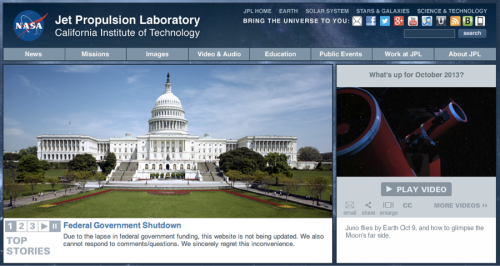 Meanwhile, Colorado has to pay the National Guard using state funds so that 200 miles of state highways can begin to be repaired, and some members of congress are still accepting salaries during the government shutdown.

The dangers of acetaminophen

Recently, This American Life did an episode on how easy it is to overdose on acetaminophen (also called paracetamol in countries outside of the US). You can listen to the entire episode in the link below:

What I find interesting is why this drug is so dangerous.

In the liver, there are a group of enzymes that oxidize many of the drugs and organic substances that enter your body. In fact, there are genes for 57 various types of these enzymes. These are called Cytochrome P450s.

Whenever you see warning labels like “don’t eat grapefruit with this drug,” it is usually because of the way the liver cytochromes are processing these compounds.

So, what happens when you take acetaminophen? Most of it is processed to a non-harmful compound. However, 5% of this drug is processed by a liver cytochrome known as CYP2E1. This 5% becomes a toxic compound (NAPQI). Generally, the liver can take care of this substance through a reaction with a compound known as glutathione. However, in cases of overdose, there is not enough glutathione to convert the bad NAPQI, and it hangs out in the liver and reacts with cellular membranes. Essentially, your liver cells are slowly killed.

Apparently, even frogs can be marsupials. How cool is that?

I have to say, I am pretty impressed to see this shirt was being sold at Target in the girls clothing section. It has pink and lace on it, but it doesn’t have some reference to not being good at math. In fact, it says “Geek Chic” on it. Amazing.

The Discovery of Greenland’s Massive Canyon

NASA scientists have recently discovered a canyon underneath Greenland’s ice sheet by using radar data. The canyon is 400 miles long and half a mile deep (for comparison, the Grand Canyon is 277 miles long and a little over a mile deep). This canyon was believed to have been formed before the glacier over Greenland formed.

Radar uses electromagnetic waves to penetrate through the ice. In much the same way that shining a flashlight through a window to a wall will case light to reflect off of the wall back to the person holding the flashlight outside, the longer radio waves used with radar reflect off of the earth’s surface.

It is definitely interesting to learn about this canyon, but the importance of the discovery is beyond being a neat fact. Water flowing beneath the glaciers actually contributes to a complex relationship with glacial movement and melting, and the transport of glacial melt water from inland portions of the glacier to the ocean is pertinent to this topic.

Check out the new I F#!&ing Love Science YouTube show

In case you are not cool (or geeky) enough to be one of the over 6 million followers of IFLS on facebook, you may want to check out the new show to catch up on fun and interesting tidbits about science.

Biases cause errors in decision making

In light of my sharing an absurd (and biased) investigation about sexual harassment at CU, I am sharing this talk on biases.

It’s an excellent talk and really made me think about my own judgments and biases. It shed light on how our judgements of people and their abilities may not necessarily be based in fact. I am not going to say much more because I think Dr. Correll says it best in her talk.

Below I have included a few links similar to studies she references, and then a few other resources on bias studies.

Orchestrating Impartiality: The Impact of “Blind Auditions on Female Musicians

Here is a collection of papers on biases complied by Columbia University:Gender, Unconscious Bias and Stereotype Threat