High-Resolution Images of a Molecule as it Breaks and Reforms

Using a very neat technique, scientists were able to image a chemical reaction. I would suggest taking a look at the article, especially if those stick drawings of organic chemicals always intrigued you.

What this lab has done is use an atomic force microscope (AFM) to detect atoms and forces between the bonds during a chemical reaction. The resulting images through the process are fascinating.

What? Engineers and scientists don’t have free time. They just sit in labs all hours of the day and think up conspiracies like global warming.

Well, that’s partially true. However, every now and then we venture outside the lab. Actually, in most cases we venture away from the desk where we read and write papers, but I like it better when people think I am doing some kind of mad science.

Recently, I came home and found the yard littered with dandelions. I don’t need to provide a link on what those are. Everyone knows they are those annoying yellow weed flowers.

Someone recently mentioned to me that you could eat the dandelion leaves. So, being the moron scientist that I am, I had to try this. Naturally, I went for one of the biggest, brightest, flowering weeds I could find, and it tasted hideously bitter. I later found out that you have to find the newly developing leaves with no flowers, otherwise the plant is bitter. I tried a newer plant as well. It wasn’t bitter but it still tasted like crap. The same person who told me about the edibility of dandelions also mentioned that wine can be made from the flowers.

I’ve never brewed anything in my life, but I’ve wanted to try. Why not start with making dandelion wine? If it sucks, I can just blame it on those crap flowers. Plus, making wine from weeds sounds like about the most hippie thing one can do after raising awareness about global warming and feminism.

In researching this on the Internet, I found that dandelion wine is actually a thing. I came across a book written by Ray Bradbury called Dandelion Wine. I also stumbled upon this beautiful song by Gregory Alan Isakov called “Dandelion Wine.”

I got to work picking dandelions and buying some cheap brewing materials. My favorite part was taking a knife to the damned flowers and slicing the petals from the flower stem. It was like beheading the epitome of annoying. 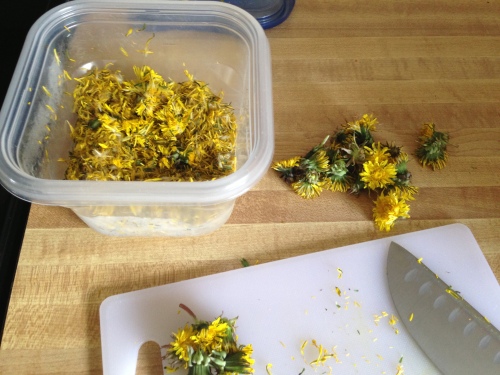 Beheading dandelions: should I feel happy or sad about this?

For this project, I did not delve as much into the science. I used the basic principle that yeast+suger=alcohol. Brewing wine and beer seems like an absolutely fascinating and complex field though, and I hope with time I can explore this more in depth. Here is an interesting article from how stuff works about brewing beer to quell your curiosity about the process.

In the mean time I get to wait and see what happens. I’m not sure if I will be daring enough to try the results. Only time will tell…

Sure, just find a periodic function to fit this data. Be sure to include that last part. Then we can talk.